In a world that is increasingly Green, sustainable, more evolved and in constant search of “zero-emissions”, Generac Mobile also wanted to make an important contribution by introducing a line of lighting towers with a very low polluting footprint, even in mines as in construction.

This commitment has given rise to many achievements that have changed the idea of light tower as we knew it until today, such as the creation of the first model equipped with a hybrid power supply, the first battery-powered light tower; and next introduction (forecasted in May 2021) on the market of PRO technology which, applied to Generac Mobile lighting towers, allows them to be used in various modes, from hybrid to electric, right up to the use of solar energy, the first ALL IN ONE solution.

One of Generac Mobile’s main objectives is in fact to create solutions with low consumption and limited carbon emissions, and solar energy not only represents the primary source of energy on Earth but is also an alternative energy to classic fossil fuels, unlimited, renewable and 100% sustainable. For this reason, Generac Mobile has decided to develop the VT-Solar, a mobile lighting tower 100% powered by batteries, without diesel/petrol engine, recharged by solar panels installed on the machine body.

The VT-Solar’s battery pack is recharged by the three 300Wp photovoltaic panels during the day, so there is enough charge to run the 4x100W LED floodlights all night long. The MPPT charge controller with which the lighting tower is equipped is both an inverter, with which to charge the battery through the photovoltaic panels, and a charger that can be connected to an external power source such as the public power grid or a generator, so as to always guarantee the charge of the battery pack even in case of emergency.

In addition to this, there are numerous other TOP quality features:

The VT-Solar joins the Generac Mobile range of light towers with the aim of providing customers with a further choice from the already numerous environmentally sustainable models in the range, allowing the customers to shrink their ecological footprint when energy use is required. 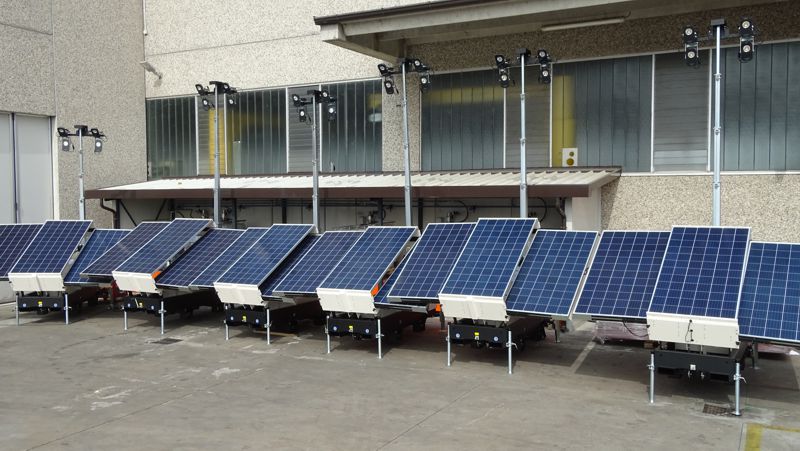